Shadow Hunter is a prequel to The Phantom Menace and leads directly into the events of that film.

A Neimoidian from the Trade Federation has decided to betray Darth Sidious (Senator Palpatine) and sell some information about the plan to blockade Naboo. As someone in the underworld could profit handsomely from this knowledge, he escapes to the capital planet of Coruscant with a “holocron” a data crystal which becomes the MacGuffin of this tale. Sidious tasks his apprentice to retrieve it no matter the cost as the Neimoidian could spoil his delicate plans to overthrow the Republic and become Emperor.

Standing in Maul’s way is a Correllian scam artist named Lorn Pavan, his droid sidekick Eye-Five, and a Jedi Padawan named Darsha Assant. Pavan is a good character although he is too close to Han Solo in my opinion. The book itself has a problem with fan service, for instance Pavan manages to get himself frozen in carbonite, despite the fact that carbonite freezing was simply a part of Cloud City’s industrial infrastructure and Darth Vader was supposed to be the first person to try it out on a human being. Pavan uses it to escape Maul at one point in the book as he is a Sith and can detect life even if hidden. Being frozen means that Pavan was in suspended animation was able to avoid detection and escape.

The Padawan Darsha was not so lucky though as she is forced to take on Maul in a lightsaber duel. Her master already became a victim of Maul earlier in the book. It plays out a bit like Revenge of the Sith or Rogue One. The good guys fall like dominos to Maul’s double-blade. I really liked the character of Darsha because unlike the Mary Sue from the Disney sequels, she fucks up constantly. Her original mission that brings her in contact with Lorn Pavan is a complete failure. Her master has to come bail her out. So she is filled with insecurity and doubt, making her relatable. She knows that she cannot beat Darth Maul yet she has no choice but to bravely fight him anyways. How much more interesting would it have been if, even after his master is cut down, Obi-Wan still could not beat Maul in single combat and had make the most out of escaping to fight another day instead?

The book has the quality of a good horror story. It is a chase in which the heroes can only manage to stay a few steps ahead of Maul at any given moment. Not a lot of time is spent inside Maul’s head (he is portrayed almost like a Terminator) but when we learn his internal thoughts his philosophy seems to closely resemble that a of a samurai. What Maul detests most is an unworthy opponent. When he slices the head off of the rogue Neimoidian he feels a sense of disgust that his victim cowered and didn’t offer any defense. Although he hates the Jedi, he learns to respect them for their valiant but doomed defense.

I have checked out a few of the prequel books and this one is the best one I have read so far. It does help that I am a Darth Maul fan. He has the Vaderesque quality of being really scary but also really cool and intriguing. This is something that Count Dooku and General Grievous lack. Why George Lucas decided to have a new Vader for every prequel movie rather than letting it be Maul for all three, we will probably never know, but it was clearly a mistake. The fans wanted more Maul but never got him. So we read books like this instead.

If the novel didn’t have so much fan service and callbacks to the original trilogy I would rank it higher, but it’ still a very engaging, fast-paced story with tons of action. Some of the stuff that takes place in the lower depths of Coruscant’s slums was good old pulp adventure at it’s finest.

The cover art for this book was just a disappointing collage of movie stills. So instead I will post this amazing fan art of Maul’s final duel with Darsha Assant. 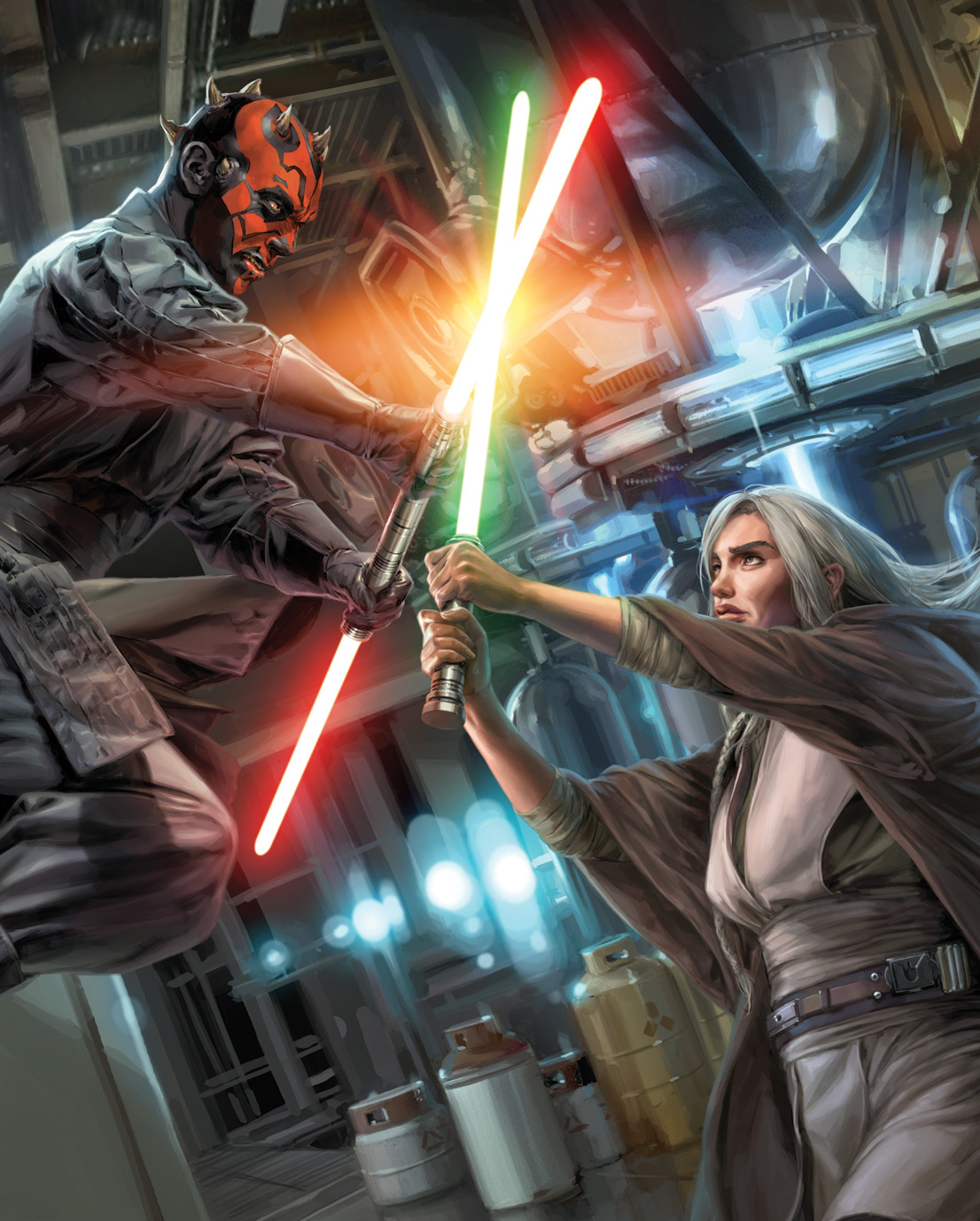