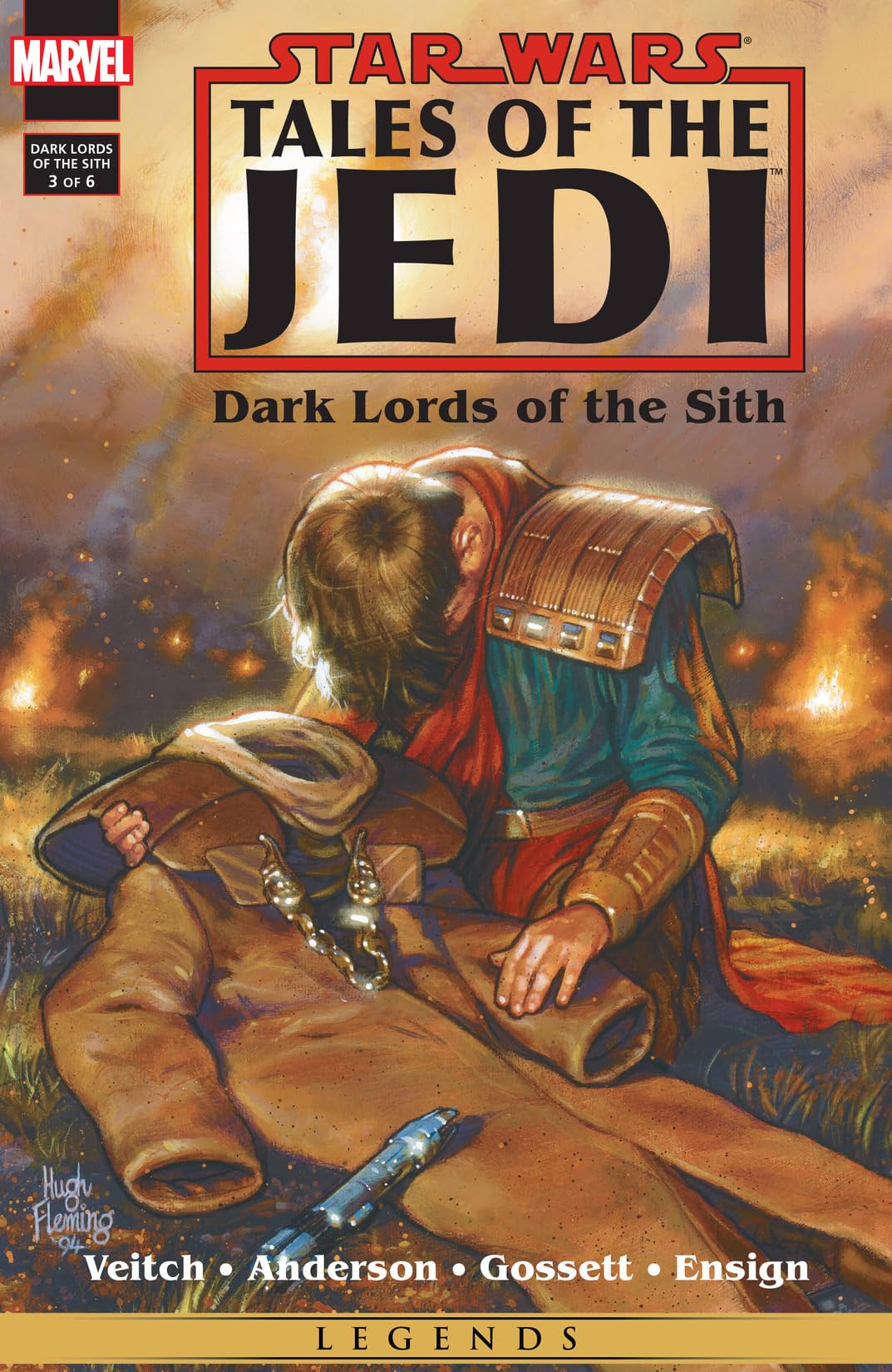 Tales of the Jedi is a Dark Horse comic series consisting of seven graphic novels. I had time to read them all after I was laid up after foot surgery. This series, which began in 1993 and ran until 1998, was one of the first stories to be told in the Expanded Universe after the Star Wars franchise had pretty much died out. There was of course the Marvel comic book series which told stories about Darth Vader, Luke Skywalker, and Han Solo until 1986 when it was canceled. After the cancellation of Lucas’ Ewoks and Droids cartoon series, the property laid dormant for almost ten years. The resurgence of interest began in 1991 with the publishing of Heir to the Empire by Timothey Zahn, the first of the post Return of the Jedi novels. Back then Lucas still had input in these materials. Tales of the Jedi is based upon notes given to the writers by Lucas himself. The first two graphic novels are about the origin of the Sith race and how they came to be controlled by a Dark Jedi. Now the word Sith goes hand in hand with the term Dark Jedi, but the Sith were originally a red-skinned humanoid race that formed the basis of a Dark Side empire on the other side of the galaxy from the Old Republic.

The tale begins 5,000 years before A New Hope. In this time the galaxy is not yet fully explored. Hyperspace jumps are extremely dangerous because navigation computers have not been invented yet. So only the bravest or most desperate explorers take random jumps hoping to find a new trade route and gain wealth and fame. A brother and sister team accidentally discover a Sith homeworld and inadvertently lead them back to the Old Republic. And so begins the first Sith War.

This story was excellent, although short, and gives a good backstory to the whole Dark Side/Light Side of The Force. Lightsabers have cords connected to power packs that were worn on the back or belt. It’s a nice touch, showing that we are in the old days of the Republic. After this introductory story, the narrative then leaps forward a thousand years.

The later five graphic novels all tell a connected self-contained story with the same characters. This is where it gets good. The main characters are two young Jedi brothers, Ulic Qel-Droma and Cay Qel-Droma, and a female Jedi, Nomi Sunrider. Their masters are good characters as well but it is the students who have the greatest character arcs. I especially liked Nomi Sunrider, someone who never wanted to be a Jedi Knight. I love this cover by Dave Dorman of the moment Nomi first picks up a lightsaber and realizes that she is a Force sensitive. It has such a mythic-religious aura about it. I even like how Dorman painted the rim lighting on her hair to resemble a halo.

Her husband is a Jedi Knight who is surprised and murdered by a band of thieves. To protect her child she picks up his lightsaber and cuts them all down with remarkable ease. The Force guides her to her husband’s master and she begins her training. But throughout the story she is a true pacifist and refuses to pick up a lightsaber again. She is not merely Luke with boobs (as Rey is) but a feminine mother protector. She eventually falls in love with the doomed Jedi Ulic Qel-Droma.

The story centers on a resurgence of Sith power on a backwater planet. Ancient Sith texts and artifacts from the previous story are discovered and once the dark techniques are mastered, the new Sith begin to easily start taking over again. One of the brothers in the story, Ulic Qel-Droma thinks that he can learn to control the Dark Side, but as always, he succumbs to it and joins the enemy. So you end up with brother vs. brother and lover vs. lover. It’s pure Greek tragedy.

Tales of the Jedi was co-written by Tom Veitch and science fiction writer (co-author of the Dune Universe) Kevin J. Anderson. The art in the series is not the best, but it is also not the worst. This series came out during the comic book boom of the ‘90s when artists were being paid more than any other time in history. Star Wars was not a best-selling property then so they had to make do with what they had. One interesting thing the editors did was have one artist draw the characters and another draw all the tech like ships and weapons.

What really makes this series great is that it was adapted into a series of audio dramas sold on cassette and CD. These were full productions with professional actors, sound effects, and music. I am kind of surprised at how well these radio plays brought this story to life and elevated the characters in my mind. The writers of the dramas expanded and clarified the story from the comic series making it into a movie of the mind’s eye. The only bad thing about it is that they weren’t able to finish it. The audio drama stops mid-way through the saga. Probably because the series kept going until 1998 and by then audio dramas weren’t selling well.

Now that Star Wars is done as a film property, I have turned to the books and comics that I missed or could not afford in the ‘90s. The stories were based upon George Lucas’ notes and are much truer to the original saga. Tales of the Jedi could easily be adapted into a film trilogy. The audio drama is essentially a film without the pictures.

You can listen to it on YouTube. The entire story was also released in a series of two large omnibus editions from Dark Horse. The video game The Knights of the Old Republic was inspired by this series. It takes place 40 years after these events.